Have you ever eavesdropped and heard a conversation that terrified you?

This question came up on Quora, which I answered. To my amazement it's had over 40,000 views in 20 hours so I thought I'd add it to the blog.

Yes, I was standing in line to go through US Immigration and Customs at Dublin airport, heading out to Newark. The two men immediately behind me spoke to each other in low, intense tones.

“You’re on your own once you get through,” said one. “I’m not helping you after that.”

The other muttered something in response.

“They’d better not search me,” said the first one. “I don’t know what I’ll do if they search me.”

I surreptitiously dropped my boarding pass so I could twist to the side to peer at the men while I bent down to retrieve it. Average-looking in their twenties. Nothing to indicate they belonged to any particular group.

“If they do search me,” continued man number one, “I’ll have to fight them.”

I’d heard enough. Terrified isn’t quite the correct word to describe what I felt, but my pulse raced as adrenaline coursed through me … this was a very suspicious conversation, particularly in an airport.

My turn came to go over to one of the scanning machines. As I slid my passport inside to be scanned I craned my neck to see if I could spot someone from security I could talk to. Even if it turned out to be nothing, how could I just ignore something that had set off every alarm in someone who grew up with terrorism literally in the back garden?

Walking on from the machine, I saw a young man and woman in Irish security uniform, and went straight over to them. Quietly, I explained what I’d heard.

“You’ll have to give me more than that,” replied the man offhandedly. “Did he say he’d be violent?”

I was aware of the two men having completed the scan of their passports and on their way towards us.

“He said he’d fight if he was searched.”

“Not enough. I need more than that.”

How much more did he need? Is fighting not being violent?

The two men were almost upon us. I shook my head at the guard and turned away to go down the stairs to the US TSA security lines. The guards obviously weren’t concerned, but post 9/11, I certainly was. By the guard’s dismissal of my concerns, I ended up feeling like a meddling, attention-seeking loser.

But nothing bad happened. Who knows what the men had been discussing. Out of context it could have been anything. 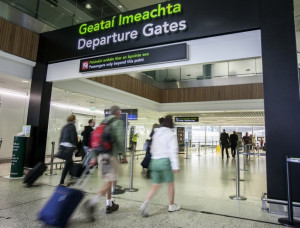